Direct2Drive is a an online game store formerly owned by GameFly that offers PC games via direct download.  As such, it is in direct competition with the PC gaming megalith Steam.  Unsurprisingly, its share of the market in comparison to Valve’s powerhouse distributor is small; in 2010 a survey by Kotaku found that only 8% of respondents had purchased a game from D2D while 64% had purchased one from Steam.

So what is an organization like D2D to do to carve out some more room for themselves in such a difficult marketplace?

It looks like D2D has decided to market to a specific niche of within gaming culture: #GamerGate.

Earlier this week Direct2Drive announced that they would be holding a Trigger Warning Sale so that their customers might “play games that will trigger the best parts of gaming” and save on “gaming’s most INCLUSIVE, DIVERSE & EMPOWERING titles.”

My troll-dar started pinging immediately.  So I clicked through to their site to see what kinds of titles were being offered.  Maybe they really were invested in diversity in gaming?  And they just hired the world’s worst public relations person?  Or maybe they were trying to make a joke about “pulling the trigger” on a purchase and it just came out really really really wrong?  A girl can hope right?

Nope.  The titles on sale were seemingly picked, much like the language of the marketing campaign itself, in a misguided attempt to make so-called Social Justice Warriors (folks who look at video games as cultural objects and critique them through feminist or anti-racist lenses despite or more likely because of a deep abiding love of the medium and a desire to take that medium serious as art) pissed off.

The sale includes games like Hitman: Absolution, which drew controversy over its E3 trailer featuring Agent 47 murdering a bunch of sexy nuns, Assassin’s Creed: Unity, which failed to offer female avatars in the game’s online co-op mode because animating them would be too much work, and Duke Nukem Forever which, yeah… 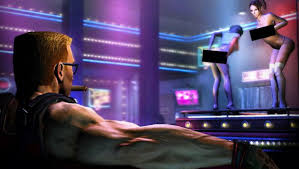 And in case you needed a little more evidence, check out this ad for the previous week’s sale, which coincided with Anita Sarkeesian and Zoe Quinn’s participation in a United Nations panel on gendered cyber violence:

So yeah.  They are specifically and purposefully courting #GamerGate.

Direct2Drive is taking a calculated risk with this marketing campaign, reasoning that if they can’t beat out Steam with the majority of gamers, they might be able to keep their company afloat by winning the fierce loyalty of a vocal minority.  They do so by thumbing their nose at folks that vocal minority dislikes.  Doing so means that they might piss off lots of offended consumers.  But they also stand to gain the support of a smaller group of consumers who might be persuaded to shop at your store just to stick it to those stupid SJWs.

And, judging by the reactions to the campaign on Twitter, their strategy might very well be working.

But note that this campaign is not exactly about “winning” in the market place.  It is about surviving.  It is about convincing a narrow group of consumers that if they just cling to each other tightly enough, eschewing all those who think differently, then they can fool themselves into thinking that they remain at the center of the gaming world when, in reality, that world has been broken wide open for a long time now.  Gaming culture no longer has a single “center” from which everything must originate.  Instead it is growing organically, bursting out in all directions from a multitude of origin points, become dense in some places and thin in others but never staying still.  D2D and the #GamerGate crowd are both equally ill-equipped to deal with these new realities.  It makes sense that one would seek out the other for comfort and reassurance.

And so as I said on Twitter when I originally saw this ad campaign, I am not “offended” by D2D’s marketing campaign.  I am not “triggered” by their choice to mock survivors and veterans to please an angry mob that doesn’t really understand what trigger warnings are/are for in the first place.  I am rather, in the worlds of the always amazing Melissa McEwen, contemptuous.