I am still riding this butt tip, you guys.

So of course, having only skimmed headlines, a bunch of #GamerGate dudes are Mad Online about Tracer’s “Over the Shoulder” victory pose being removed from Overwatch.

The typical accusations are flying:

“Why are feminists so sex negative!  Next you will be demanding that Blizzard put Tracer in a burka!” 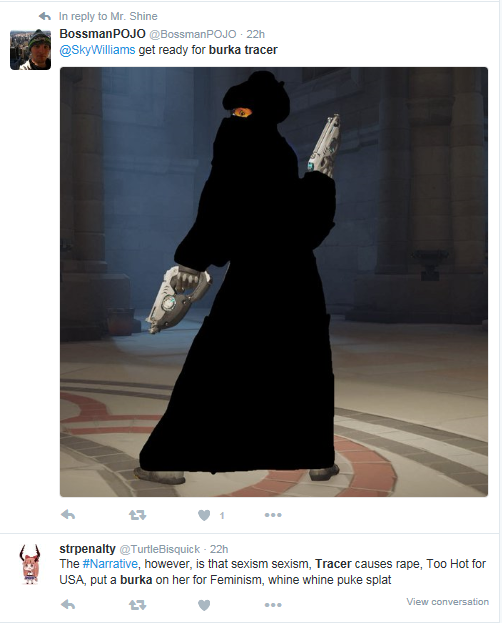 “Oh, are you triggered by this pose?  Are you offended?  Why don’t you go back to Tumblr?”

Wow!  So the original post on the Blizzard beta test feedback forums must have been super over the top and shrill, huh?

What about this pose has anything to do with the character you’re building in tracer? It’s not fun, its not silly, it has nothing to do with being a fast elite killer. It just reduces tracer to another bland female sex symbol.

We aren’t looking at a widowmaker pose here, this isn’t a character who is in part defined by flaunting her sexuality. This pose says to the player base, oh we’ve got all these cool diverse characters, but at any moment we are willing to reduce them to sex symbols to help boost our investment game.

Getting art into a triple A game isn’t a small task, it has to go through an implementer, a team lead, an art director, and a creative director. This is a team effort. And I believe the team is responsible for upholding the great example overwatch can set to the rest of the industry for creating strong female characters.

I have a young daughter that everyday when I wake up wants to watch the recall trailer again. She knows who tracer is, and as she grows up, she can grow up alongside these characters.

What I’m asking is that as you continue to add to the overwatch cast and investment elements, you double down on your commitment to create strong female characters. You’ve been doing a good job so far, but shipping with a tracer pose like this undermines so much of the good you’ve already done.

First, note that this post does not ask Blizzard to remove all sexual content from the game.  See the reference near the top to Widowmaker?  This is Widowmaker:

She is a sexy-ass character (pun somewhat intended).  The over-the-shoulder sex  kitten pose would make total sense on a character like her.  In fact, the OP says as much in a later post on the thread:

I think my point was that Widow depicts a specific trope or fantasy, one that is by all means fine! If you want to play games as a woman who kicks !@# in high heels, awesome. The problem for me is when all the female options become that trope.

Overwatch has been doing so well giving players so many different cool female personalities, and something so small like this tracer pose can really undermine that hard work.

The Feminist Collective is not after all the butts!  You can still have some butts!  And some boobs even!  The feedback was specifically about how the pose failed to match up with the personality of the character.  It is okay to have sexy female characters but if every female character winds up suddenly turning into vixen apropos of nothing, then something strange (and, yes, a bit sexist) is happening. It’s like saying: “lets make lots of different female characters with different characteristics and personalities and moods… but ALL of them must be willing to suddenly turn into a porn star at the drop of a hat if I want them to.”  If you think every single female character in a game must be available for sexualization then I would argue that you are the one who is being overly dramatic and easily offended.  Your world won’t end if you lose access to a single butt.  There are many other butts out there for you to ogle.  Some of them even in this very game!

Second, the OP is far from engaging in hysterics.  In this post and several to follow, the OP thoughtfully and maturely discusses and defends their position.  I honestly think this is a huge reason why Blizzard chose to listen.  The trolls who jumped on the thread to attack and belittle only undermined their own position.  If a company is trying to decide which faction of fandom to side with on such an issue then, from a PR perspective, doesn’t it make sense that they would want to align themselves with the user who presents their position in a PR-savvy manner?  Does Blizzard want to be known as a company that courts users like the OP?  Or the company that remains loyal to a faction of trolls that gleefully harasses and insults the largest growth sectors in the industry?

You see a lot of people angrily threatening Blizzard over this, saying that the company is making a mistake and alienating their “true fans” by “caving” in this way (more on that below).  But this argument has two major flaws that I can see:

Game devs have assumed that the logic described above is correct for a long time.  They assumed that “hardcore gamers” mostly consist of stereotypical adolescent straight white males and they pitch the vast vast majority of their content towards those users with little thought to who they might be alienating.  They assumed that no one else was even considering buying games anyway, so there was little point in appealing to them as potential consumers.

But this logic is being questioned right now, as demographic studies are showing that the definition of “gamer” is changing.  Furthermore, companies are starting to become skittish about associating with the trolliest of trolls coming out of #GamerGate (which, through no coincidence, constantly insists that they represent the interests and opinions of “real gamers” and “true fans”) because their support may well be toxic enough to erode support from other potential sources.

In other words, game devs are starting to experiment with other economic models, trying to figure out if it is actually more profitable to cater specifically to a narrow band of gamers(one that actively fights against attempts to recruit a larger and more diverse community) or to grow what it means to be a “gamer” in the first place.

Blizzard Senior Vice President Chris Metzen put it like this:

I think we’re clear that we’re in an age where gaming is for everybody,” Metzen continued. “We build games for everybody. We want everyone to come and play. And increasingly in the world like people want to feel represented. People from all walks of life, from everywhere in the world. Boys and girls, everybody. And you know, we feel indebted to do our best to honor that. There’s a lot of room for growth, but specifically with Overwatch over the past year we’ve been very cognizant of that, like, trying not to oversexualize the female characters. I don’t know that we oversexualize the male characters. But it’s something we’re very sensitive to. We want that to be part of who we are, of what our brand looks like and appears to our community. I think Mike [Morhaime] talked in a roundabout way to that in his speech this morning. So it’s something we’re very cognizant of. We want girls to feel kick-butt and equally represented.”

In other words, Blizzard was not “caving” when they removed this pose.  They were following through on something that has been in the mind of Overwatch devs and Blizzard execs since Nov of 2014.

And the more pictures of Tracer in a burka that #GG supporters post on Twitter, the more, I suspect, game devs will be leery of them and their arguments.  Jumping into bed with these trolls is Not a Good Look.

If this is so, then why are these fans so doggedly sticking to their trolling tactics?  After being excoriated in the media, getting rejected by developers at conventions and press shows, etcetera, why do they think that this is a successful tactic to sway developers?

Tune in for my third and final butt-related post, where I will explore this question.