Thanks to all who came to the spontaneous program on The Handmaid’s Tale at WisCon!  It was a pleasure to dissect the book and the series with you!

One new thread on that the show weaved into Atwood’s story that I remain especially interested in is the expansion of the section featuring the Mexican trade delegation and in particular the reveal that Gilead’s most valuable commodities are its handmaids.  In the show, it is revealed that the Mexican ambassador’s fact-finding mission is not, in fact, humanitarian in nature.  Rather, it is a chance for Gilead to showcase their wares, and the “fruits” that their captive laborers have produced: healthy children born during a time when a global fertility crisis has the world scared that the human race might be on the brink of extinction.  The Mexican ambassador shares with Offred that, in her home city, there have been no new children born for the last six years.  She has come to visit Gilead not to intervene in their system of sexual slavery but to see for herself if it works.

But this plot twist raises the question: if Mexico (or any other country willing to enter into negotiations with Gilead) is really so desperate as to consider instituting a program of sexual slavery to combat their fertility problem, why do they need to resort to trade with Gilead to institute one? Why not just create a handmaid program of their own, rounding up their own fertile women and creating their own breeding systems, with or without the religious window dressing that Gilead’s Commanders invoke. In other words, if it is theoretically permissible to have sex slaves and to force women to give birth against their will in the first place, then why bother to import them? If you are already contemplating the possibility of transforming women’s bodies into livestock, then why would you give up your own valuable trade goods to receive a shipment of a resource that you already have in abundance, waiting to be scooped up and exploited?*  Why not just create breeders out of your own women? Why does having them come from Gilead somehow make it better?

My answer: it is seemingly much easier for the Mexican delegates to countenance buying someone who is already a slave than it is for them to create slaves. When they purchase the handmaids, they are attempting to purchase some small bit of salve for their own consciences.  They are buying a thin veneer of moral superiority the ability to tell themselves that those backwards Gileadians are the ones who did the enslaving. They are just wisely taking advantage of the system that had already been put in place. It wasn’t our idea, they think, so we aren’t as morally culpable.

Furthermore, if they don’t have to go through the project of rounding up and domesticating the handmaids via a combination of brainwashing and torture, then it is much easier for them to pretend that meekness and servility are the handmaid’s natural state, that as debased Others from an uncivilized foreign land, they are naturally inferior to Mexico’s free citizens and, thus, the Mexican government is actually doing them a favor by bringing them in and subjecting them to more reasonable, more rational, and kinder masters.

Do all of these stories sound familiar?  If so, then you are familiar with the justifications used to prop up the enslavement of Africans by Europeans.

“Africans were already enslaving each other.  They sometimes sold their fellow men to white slave traders.”

“They are better off working in a civilized nation instead of their own barbarous country.”

“If we don’t take advantage of the economic advantages of the slave trade then our rival nations will.”

Obviously these arguments were morally reprehensible, and they remain so in The Handmaid’s Tale, especially when we know they are coming from a woman who is afforded freedom and power herself.

But it is also interesting to think of this sequence as a sort of “fuck you” to a version of White Feminism that sidelines issues that effect women of color.  It is easy to imagine women from the third world abandoning their white “sisters” when the tides of power have turned, seeing as how white women have consistently failed to use their positions of privilege to be good allies to women of color (see: the 53% of white women who voted for Trump). 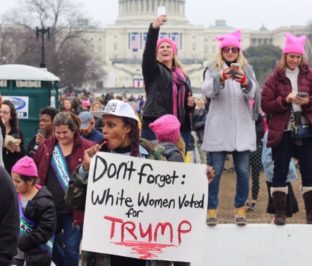 In other words, if Serena Joy’s story is a warning to conservative women then maybe this storyline is a warning to White Feminists whose activism fails to extend beyond their own life experiences.  A feminism that leaves out intersectionality leaves behind a lot of women.  And thus as white women we shouldn’t be surprised when those women don’t rush to our aid when our backs are against the wall.**

*Note: one possible explanation for this set up that I’ve seen floating around is that women in different countries experienced the fertility crisis to different degrees.  Maybe there aren’t enough fertile women in Mexico to make such a system work.  Maybe women in the United States-cum-Gilead are far enough away from whatever environmental disaster caused this epidemic of infertility that they have a greater chance of being able to give birth successfully than women who were closer to it (I wonder what “it” was?  A nuclear disaster?  The simple accumulation of toxic garbage and chemicals?  Some new disease?).  But even if this were the case, then that doesn’t mean that it is morally acceptable for the Mexican delegation to buy into a program of slavery.  In fact, I would argue that it would be morally preferable to allow the human race to die out entirely rather than denying freedom to half of it.  Freedom is a large part of what makes humanity worthwhile, so, to me, taking away the freedom of women would mean that humanity had lost the very thing that made it worth conserving in the first place.

**Disclaimer: For those who aren’t familiar, the term “White Feminist” is capitalized here because it is referring to a particular brand of feminism that ignores race.  Not all white women who are feminists are White Feminists.  That being said, if your first reaction to reading that term was to puff up and get defensive about it then you are probably a White Feminist.  For more on this topic, read the articles linked above.