Okay just one more post about pro wrestling (for now) and then I promise to get back to our regularly scheduled programming.

So, the WWE has been taken to task lately for their lackluster treatment of their black athletes, from racist storylines to a derth of black champions to the racist comments that got superstar Hulk Hogan fired.

So I wasn’t exactly surprised to see a really stupid “tribute” to Martin Luther King, Jr. at the opening of WWE Raw on MLK Day.

The video opens with the stuff you would expect: an excerpt from the “I Have a Dream Speech.”  But then it segues into a list of… other awesome black people, I guess?  Some of them make sense, like Rosa Parks, Barak Obama, and even some black athletes that broke down barriers like Jackie Robinson, Jessie Owens, and Muhammad Ali.  But some of them were a bit more… puzzling (Condoleeza Rice?).

My fellow hate-watcher joked: “What’s next?  A black guys vs. white guys match that ends in a draw?”  We laughed and laughed.  There was no way that the WWE could be that tone-deaf right?

They could be so, so much worse.

One of the signature matches of the night was a 4-on-4 match slated to be: 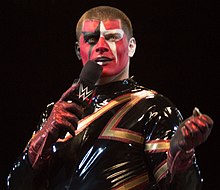 We had to giggle.  Our prediction had come true!  But there was more stupid to come.  We are taken back into the locker room before the match to look in on O’Neil giving a pep talk to his team.  They all put their hands in for a team cheer when suddenly, a fourth hand enters the mix.  It’s Neville!  And he is eager to help O’Neil out by being his fourth teammate.

All images from Wikipedia

But O’Neil and the gang are skeptical.  They aren’t sure if they want his help.  But then they start to get into the spirit of the day and O’Neil says outloud, I shit you not, “#KeepTheDreamAlive.”  Like, the said “Hashtag.”  And then he said the rest of those words.

And with that, they were off!

How nice of WWE to show us the true meaning of MLK Day: black guys extending their friendship to white guys.

But it doesn’t end there.

So the match goes on for a while.  And O’Neil’s team is in trouble.  But then!  Neville comes to the rescue!  He makes the final pin and wins the match for the team!

He was a White Savior.  Literally.