Over the winter break I went back to my hometown in Central Illinois where I got to check out their brand new Bar/Arcade for the first time!

They had several classics in there including Arch Rivals (a precursor to NBA Jam in which you are allowed to punch your opponents in the face), Burger Time, Dig Dug…  They even had a Gauntlet Legends arcade machine (though, of course, nothing compares to the original).

And they had a game that used to captivate my brother and me: Teenage Mutant Ninja Turtles: Turtles in Time.

This game is based on the version of the turtles from the 80s cartoon, so it is fully of cheesy high fives and “Cowabungas!”  Go ahead and sing the theme song to yourself right now.  No one is looking.  Just do it!

The game begins when Shredder steals the Statue of Liberty, Carmen Sandiago-style (now you probably want to sing that theme song, too) and the turtles chase after him.  But Shredder is able to trap the turtles in a time warp!  So they have to battle their way through the eras to return to modern day NYC.

I must confess, it always puzzled me how the turtles were able to travel through time simply by punching enough guys.  Like: if you punch 500 guys, you will skip forward 1000 years!  Why?

I always played as Raphael, because his “gruff guy with a heart of gold” attitude from the movies spoke to me and because my girl April O’Neil wasn’t playable.  My brother typically played as Leonardo.  We would constantly fight over pizza.  Like, stop playing and start hitting each other type of fighting.  If pizza appeared on the screen, we would always make a bee line over to it, even if we were at full health, just to steal it from each other.

We also loved Teenage Mutant Ninja Turtles III: The Manhattan Project for the NES, which we rented for weeks at a time from our local video store. 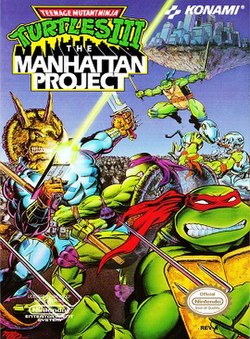 The Barcade was great fun, but when it came to TNMT I had one criticism.  At the Barcade, all the games were free to play, which you would think would be a dream.  But when it comes to games like this, the free play takes all the fun out of it.  You lose all sense of danger because whenever you die, you can simply hit a button and get another free life.  The game quickly devolved into “stand next to the boss and hit kick over and over using up a million free lives until he dies.”  And that got boring fast.