#TBT Ogre Battle: The March of the Black Queen

I never actually played Ogre Battle on the SNES.  I don’t think I ever even saw a copy at a video rental store or a toy store or any of the other places people used to go to buy games before the existence of specialty shops like GameStop (let along digital downloading services like Steam).

Rather, I discovered the game in amongst a bunch of ROMs I had downloaded for my ZSNES emulator while searching for a copy of some rarity or another.  And it was like nothing I had ever seen before. 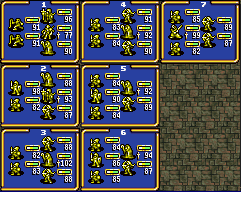 You are the commander of an army and your job is to basically manage it like a sports team.  You develop various units, trying to balance offensive and defensive characteristics, elemental affinities, and movement abilities (swimming, flying etcetera) and deploy them to try and win back key strategic points on a series of maps.  You can also liberate additional cities or scour the countryside to look for treasure and recruit powerful monsters for your army.  The game even follows a day-to-night cycle, with different types of enemies that roam in different kinds of terrain at different times.

Simple enough.  Except the game also included a system that, at the time, blew my mind: the reputation system.

You see, as someone looking to win the hearts and minds of the kingdom in addition to its lands, the player is tasked with paying attention to the optics of their war in addition to the effectiveness of their troops.  You have to think about what kinds of units are stationed in cities (don’t want to have a bunch of werewolves and vampires garrisoned in a small village!), pay attention to how long you collect tax money from the locals, and, strangely, you have to manage your army so that your units never grow TOO much more powerful than those belonging to your enemies.  I guess the people see lopsided battles as somehow… unsporting?  Anyway, failing to look after any of these issues could cause your reputation and your alignment to fall, which in turn might close off some opportunities for collaboration with potential team members.  Then again, though, it might also open up opportunities for dark alliances…

Anyone who knows me knows that I am the most goody two shoes video game player on earth.  I cannot stand “evil” playthroughs in sandbox games like Fallout and I refused to play as a Sith with my husband in Star Wars: The Old Republic (I maintain that the Horde in World of Warcraft is not actually an evil alliance, but that is the subject of a whole other post).  And so, of course, whenever I fire up my copy of Ogre Battle I have to patiently manage my army so as not to allow any units to become overpowered.

I don’t think I’ve ever made it all the way through to the end.  Other newer titles always beckon and the plot of the game is pretty thin so once I’ve get tired of playing with my little soldier toys I wind up wandering away.  But the robotic “Fight it out!” announcement is still a stock catchphrase in my household.

One thought on “#TBT Ogre Battle: The March of the Black Queen”