A lot of my recent posts have been about the game of trolling and how it functions as a rhetorical disciplinary mechanism for various online communities.  So, of course, as I gamify my dissertation, I had to include the trolls!

To recap: my game is about harmful memes in the gaming community re-imagined as a zombie virus.  The first area I created was the site of the outbreak: a gaming convention.  As the player searches for the source of all the chaos, they will discover a sewer drain that leads down into a Troll’s Nest.

The Troll’s Nest is a maze filled with enemies that will chase the player down if they get too close (whereas the slow, stupid zombies in the first area will only attack if the player initiates contact with them).  Exploring the far corners of the maze will sometimes yield troves of treasure.  But sometimes, it will simply lead to a dead end or a difficult battle. 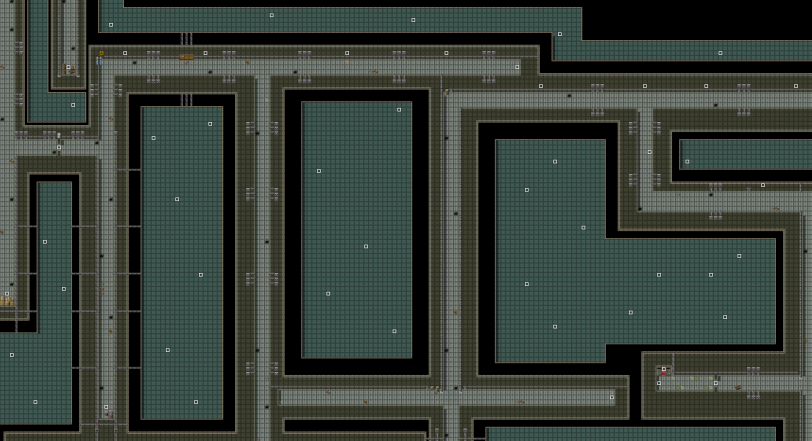 There are also several locked doors in the maze that will stop the player’s progress until they find the switch that opens them.  In true troll fashion, these switches are located far away from the doors they control, forcing the player to double back and search for them before they can move forward.

At the end of the maze, the leader of the trolls (I’m still thinking about a good title or name for it – if you have a suggestion, leave one in the comments!) will explain to the player that trolls are not the source of the meme.  Rather, they simply exploit the existence of the meme in order to sow chaos and discord “for the lulz.”  It will then try to insult and provoke the player into one final boss fight battle.  The player will then have two choices: they can either take the (difficult) fight and, if they win, receive a powerful offensive item OR they can ignore all of its provocations until it goes away in disgust, which will win them a powerful defensive item.

Either way, once the Boss Troll is out of the way, it will be on to the next potential source of the plague: the corporate offices of a video game developer.