Kyle Wagner’s excellent piece on #GamerGate contains this extremely useful little nugget that I’d like to expand upon here:

There is a reason why, in all the Gamergate rhetoric, you hear the echoes of every other social war staged in the last 30 years: overly politically correct, social-justice warriors, the media elite, gamers are not a monolith. There is also a reason why so much of the rhetoric amounts to a vigorous argument that Being a gamer doesn’t mean you’re sexist, racist, and stupid—a claim no one is making. Co-opting the language and posture of grievance is how members of a privileged class express their belief that the way they live shouldn’t have to change, that their opponents are hypocrites and perhaps even the real oppressors.

One of the current PR tactics that #GG supporters are encouraging each other to use is the cataloging and publicizing of examples of “anti-GamerGate”* folks using rude, insulting, and sometimes even threatening language.

The Gamer Gate Harassment Tumblr serves as a clearing house for such accusations. And many of the examples found there are regrettable and deplorable.

However, there is a difference between individuals being assholes to each other online and the creation of a sustained and organized campaign of harassment that some #GamerGate diehards have been mounting against Anita Sarkeesian, Brianna Wu, Zoe Quinn, and, most recently, Felicia Day, a geeky actress, video game voice over artist, and YouTube content creator who wrote an impassioned post on her Tumblr about how she feared to speak publicly about #GamerGate lest she be doxed… which she was, within the hour, in the comments on that very post.

Part of the purpose of the Gamer Gate Harassment Tumblr is to provide resources for #GamerGaters to lobby advertisers into pulling their support for sites like Gamasutra and Gawker Media-owned Kotaku, both of which published articles attacking #GamerGate’s trolls. By flooding the customer feedback pages of companies like Intel, Adobe, and Mercedes-Benz with angry examples of the “bullying”  by those mean old feminists and games journalists (and sometimes even *gasp* FEMINIST GAMES JOURNALISTS?!), they cloud the issue for any who haven’t been closely following this topic. Those who only know that there is this thing out there called #GamerGate that has something to do with people being cruel to each other on the Internet are quickly convinced that everyone on both sides of the issue are equally to blame.

Further clouding this issue is the discovery that several of the examples featured on Gamer Gate Harassment were faked. Take, for example, this Tweet supposedly written by game developer and #GamerGate target Brianna Wu: 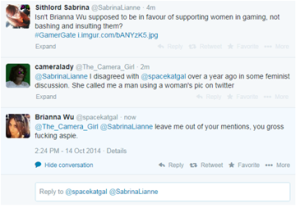 Or this example of a fake Ask Me Anything Reddit thread attributed to Harris O’Malley, aka geeky advice columnist Doctor Nerdlove: 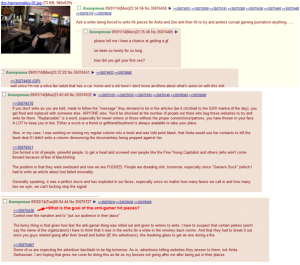 These faux-incriminating screencaps are called “false flags.” And, of course, #GamerGaters have been accusing their targets of tarring their movement with false flags from the very first (including accusing victims of doxing themselves and fabricating death threats in order to get attention from the mainstream media).

This is the ultimate aim of the quintessential Internet troll: to convince the general public that the Internet is inevitably and irretrievably awful and that it is therefore best to simply leave it to the trolls as much as possible. In this way, trolls police the boundaries of the online community, disciplining new members (such as the recent influx of women into gaming documented by the Entertainment Software Association) by attempting to “haze” them until either they have internalized the (toxic) norms of the community or until they leave in frustration. They hope to convince observers to throw up their hands in despair of ever parsing the ins and outs of the controversy and to conclude that the ‘Net is just a fundamentally trollish place (and thus, that it is worthless to ever attempt to change it).

This is why it is imperative that anyone who is actually interested in fighting against corruption in games journalism (and there really are numerous concrete examples of ethical breaches in this industry) should distance themselves from the #GamerGate label. We do need to have conversations about these issues. But the goal of the trolls that have hijacked (or, to be less generous, created and nutured) #GamerGate don’t want to have a conversation. They want to make real productive conversation impossible in order to prevent any kind of change (be it changes in the diversity of representation in gaming or changes in the relationships between games journalists and game creators) from happening. They do this by muddying the waters so thoroughly that it becomes impossible to broach the topic without a whole heap of drama and vitriol popping up almost immediately. Those legions of #GamerGate supporters who claim to be against harassment need to create for themselves a new hashtag, one that hasn’t been co-opted so completely by the trolls. And if holding onto that particular label is more important to them than distancing themselves from people who are threatening and terrorizing women in gaming culture (note: none of the most vilified targets of #GamerGate harassment campaigns thus far are actually games journalists!), well then we have an idea about where these people’s interests actually lie.

Let’s end this post on a positive note. #GamerGate has (indirectly) produced one glimmer of positivity: my new favorite meme. These images parody the false sincerity of Internet trolls by pairing text describing the innocent cover story of the movement (“It’s actually about ethics in games journalism”) with an image of horror or abuse. The best examples use texts that are a part of what I like to think of as the “geeky canon” (which is made up of beloved or nostalgic video games, comics, and science fiction and fantasy movies) to quickly communicate the nerd cred of their creators (no fake geek girls here!) while simultaneously demonstrating an awareness of trolling tactics and a refusal to buy into the false face that the trolls are exhibiting. 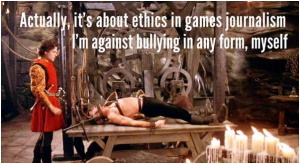 And, of course, my personal favorite (zoom in, I promise it is worth it):

And finally, for one more bit of good news, check out Anita Sarkeesian on The Colbert Report.  One side effect of this whole mess that the trolls never expected was the possibility that their harassment would draw mainstream attention to the problems in gaming culture that Sarkeesian originally intended to unearth.

*This attempt to brand their opponents as “antis” is also a PR tactic straight out of the Newt Gingrich political handbook: by associating so-called “social justice warriors” with negative language, #GamerGaters hope to paint a rhetorical picture of their opposites as fun-hating, politically-correct, feminist scolds.